Ellamae hurried into the little church, pausing to say hello to friends as she passed, heading toward her customary seat near the front of the sanctuary. She loved sitting up front where she could enjoy the choir and see their expressions change as the music moved them. And she didn’t want to miss a word of the sermon delivered by Rev. Booker T. Redman, affectionately known as “Boomer” among his congregants. Boomer Redman was blessed with a magnificent voice, a rolling basso profundo that could rattle the stained-glass windows and carry out into the parking lot. When he spoke the word of God, no one dozed off…

The service proceeded as usual: several hymns, a scripture lesson, a rousing performance by the choir, announcements from the current president of the congregation, and finally, it was time for the sermon.

Rev. Redman stepped to the pulpit and it was clear he was a troubled man this day. His brow was furrowed, his lips pinched together tightly, as though someone or something had hit him in the gut. He adjusted the microphone, though he didn’t need it, raised his eyes to look out upon his flock, and began:

“Where have all the flowers gone? / Long time passing …”

So goes the folk song popular a few years ago. The song teaches us the answer: Young girls pick the flowers. The young girls go to young men. The young men go for soldiers. Soldiers go to graveyards. Graveyards go to flowers. And so, the cycle is completed, only to begin again…and again. We are left with the haunting question: “When will we ever learn?”

Just a simple little song. Or is it? We look around our community today and we see the story set in motion: Young men taken from among us, caught in the draft, or enlisting to avoid it, and then—gone for soldiers, every one.

Young men from the barrios and ghettos of our cities, sons of coal miners in rural Appalachia and sharecroppers in the Deep South, black and brown—and yes—white. Our young men, our children. Gone for soldiers, every one.

With money and influence, there are options to consider: college deferment; conscientious objector status; a rare spot in the Reserve or National Guard. And if all else fails, leave the country. Head north to the bosom of our friends in Canada.

The recruiters flock to our neighborhoods. Enlist, they say, and you can learn a useful skill. Enlist and there will be money for college when you get out. Never mind that your school system left you reading at a fourth-grade level. Enlist for the promise of a brighter future.

Brothers and sisters, look around you. Look at the young men sent home with broken minds and bodies, fending for themselves out on the streets, the only useful skill they’ve been taught: to kill or be killed.

I say to you it is time for the cycle to end, time for our young men to soldier no more, time to end the perpetuation of the Warrior Class culled from the families of the working poor, cannon fodder for the war machine.

It is time to say, Hell no, we won’t go. Time to answer the age-old question: “When will we ever learn?”

This was not a typical sermon for Rev. Redman. He generally stayed close to home, basing his message on the day’s scripture lesson as it applied to life in the 20th century. His preference was to leave politics to the politicians. His message this day caught the congregation off guard. Of course, there had been the customary cries of “Amen” during the sermon, offered up to punctuate the traditional call-and-response style. But Boomer Redman had been oddly subdued in his delivery, raising his voice only to punctuate our children and Hell no, we won’t go. His final line—When will we ever learn?—was delivered just above a whisper. The overall impact was stunning: his message had been driven home with the intensity of a sledgehammer…

Posted by C.W. Spooner at 10:23 AM
Email ThisBlogThis!Share to TwitterShare to FacebookShare to Pinterest

C.W. Spooner
Father of FIVE beautiful children. Grandfather to TWELVE, great grandfather to FIVE. Aspiring (perspiring?) writer with SIX books in print and one on the way.

Foster ...and other stories 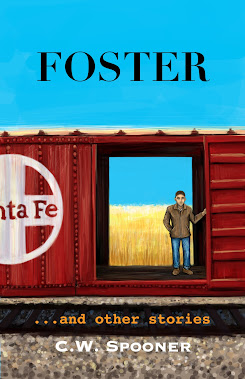